To build or not to build, that is the question 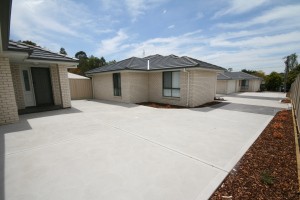 I met an interesting chap today.  He has developed property before and is experienced but was looking to fast track his property portfolio this year.  He also owns and runs a large business and doesn’t have the time needed to focus on property developing. Although he loves it, finding suitable sites was time consuming. He needed some help because he understands too well the rewards developing can reap and how time equals money.

I’m happy to say that our meeting today may have made him $110,000 and we haven’t even located a site for him yet!  I’ll explain how.

He is currently holding two DA approved dual occupancy sites and one of the questions he asked me was “Jo, should I build my approved duplexes or sell the land DA approved? Which will make me the most?”

A good question to ask.  His strategy was to accumulate property quickly and hold for the long term but what was most important for him was to create equity.  So, what scenario would be more profitable?

To build or not to build…that was the question.

I thought I’d nut it out for you today so you can see how I answered him.

Ok, firstly you need to know that the approved site he was thinking of selling is part of a prior development. He had purchased a large block of land with an existing, yet run down house. He gained approval to build a duplex behind the house and subdivide essentially cutting the block in two.  He has already completed this part of the development.  Then he gained a second approval to demolish the old house and build another duplex on the newly created lot at the front.

He wanted to know if he should sell the front lot off with approval or build the duplex and keep them or sell them.

There are several considerations:

-          Selling costs if selling the approved land or the villas

So, remember he had developed the block originally and the old house was renting for $180 per week which helped cover holding costs so he could easily sit and land bank if he wanted to.

He paid $200k for the land with original dilapidated house; it was on a large block with separate access at the back.

The cost to build the duplex at the rear of the house was $350k including subdivision costs.

The two villas he built were valued at $300k each.

His equity is only $50k so far but he still holds half the land with the old house on it.

If he wants to sell this DA approved land, he needs to consider how much the next person will make. You can’t just pluck a figure out of air and sell the land at this price. It’s important to work backwards so that there is something in the deal for the next person otherwise you won’t sell.

Note, I haven’t included other costs such as stamp duty and holding costs, so we are looking at very rough round figures.  Based on this, his gross profit at this point (roughly) is $50k in equity after building the back duplex plus the $170k land sale.  So $220k.

But, if he held the land and built the duplex he would be much further ahead.

(less costs on both side, so again I stress these are rough figures).

He can create an additional $110k or so if he builds and holds.

I won’t go into the sell scenario as there are too many costs to include. It’s very important that if you develop to sell that you work closely with your accountant to consider costs such as Capital Gains Tax and GST when selling.  Anyway, this chap’s strategy was to hold if he builds. So the yield and equity creation was more important to him.

I hope this makes sense. The numbers can be hard to follow and obviously need to be much more refined than what I’ve used above but this may give you a gist of how you can make good money from developing IF you make the right decisions.