When Time Is On Your Side 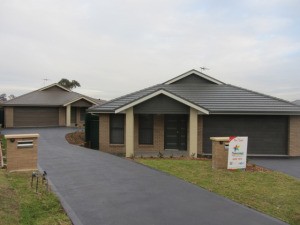 In the last few weeks I completed a dual occupancy project in Muswellbrook, a town in the Hunter Region of NSW.  This project took two years from the time that I found the land to the time that we had both four bedroom houses tenanted at a record high of $500 per week. Sounds like a long time for a dual occ…but time was on our side.

We were able to buy into a subdivision in a prestigious estate before the land was registered. This is not a game for everyone as often registration can get pushed out and in this case that’s exactly what happened but patience prevailed.
It didn’t matter about the delay, we were literally buying land off the plan and in the time that my client exchanged contracts (on a minimum deposit as negotiated as one of our terms) to the time that he settled on the land, it had increased in value by about $30k.  This is unusual but we had been able to buy in early, get a great deal and get the pick of the sites in this release.
Property Bloom negotiated an awesome price of just $142,000 for a 1066sqm block of land which represented a 15% discount off the original asking price. What’s more, this land developer ended up naming the street after me.  That was totally unexpected and I was honoured.  Perhaps now this street will see more strong growth because of its name!
So, whilst we were waiting for the land to register, we didn’t sit around twiddling our thumbs, we were busy producing a concept plan, I wanted two large four bedroom houses as my research had told me that was what the mainstream market was looking for. It meant we’d appeal to both families and contract companies who looked for houses they could put 3-4 men into whist seeing out their contract, usually to the mines.
Property Bloom commissioned two builders to tender on the project. As we got closer to registration and the civil works were completed in this part of the estate, which means the infrastructure such as roads, guttering and footpaths were built and the lots were finished being sculpted, then we ordered our detailed or contour survey.   This is required before you can finalise plans.  We were well into the design phase by now.  As registration approached, the DA plans were completed, a builder engaged and we had out ducks lined up, ready to lodge the DA with council as soon as the registration took place.
Council approval took just five weeks and we had our Construction Certificate plans finalised and lodged within another few weeks. Before we knew it we were under construction.  But was this good timing?  As we started building it just happened to be at the time NSW saw one of its wettest years in history!  Our builder rallied, completing the project well within the 26 week contract period and we had Christmas during this time.
So the longest waiting period was the time between securing the land on a low deposit which meant holding costs were minimal yet capital growth took place on the land.
As we neared building completion, we interviewed agents and negotiated a discounted management fee for our client, appointed the agent, discussed what we wanted to achieve and then stood back while they did what they do best which was to achieve a record high rent for us. It’s important you mange this part of your development closely as the one time you have to attract the highest rent is when your properties are brand new.  Property Bloom was able to save our client thousands of dollars by negotiating the terms of management.
Here are the high level results of this development in a nutshell:
This is an awesome example of a successful development as several factors came into play.
On first impressions a project may seem to take too long but when you drill down to the detail it’s often not until you finalise the timeline of a project and reflect on what happened over the entire project that you can see the real results.  In this case, time really was on our side as the price for land increased during the registration period and this combined with a speedy approval and build phase and a strengthening rental market meant our client benefited in more ways than one.
Posted on 4 July, 2012 by Jo C  |  permanent link
Categories: Property Insights