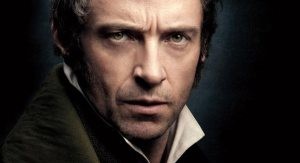 “Aaahhh”….. That’s the sound I made when watching Hugh Jackman receive his Golden Globe Award this week for best actor.  I was impressed with the credit he gave his wife Deborra-lee Furness for helping him keep faith.

Keep faith?  A talented and experienced singer, dancer and actor, yet he admitted he had doubts and lost confidence during rehearsals for Les Miserables.  The man is not only truly amazing but honest.

Hugh Jackman nearly quit due to feeling overwhelmed and unsure of himself.

“Three weeks before we started filming, we had a terrible day of rehearsal, a humiliating day. I came home to Deb and I said, ‘It’s time, I’ve gotta ring him (his director) and tell him there’s someone else to take this role”.

“I really thought I’d bitten off more than I could chew … my wife talked me off the cliff – thank you for always being right, baby,” he said.

Wow, even Hollywood stars want to give up some times. It just goes to show how human he is. Yes, Les Miserables would have been a very ambitious production for anyone to take on but look at what Hugh achieved by pursuing the role and getting on with it – with the support of his wife.  Not only did he win the Golden Globe for best actor but he’s been nominated for both an Oscar and a BAFTA award.

What a great example of taking on a challenge, conquering fears and using the support of others to help get through to the end.  And look at the rewards he reaped.

So what unnerved him?  Hugh must have thought about the risk. The risk of not doing his best, the risk of doing something he had never done before, the risk of failing.

We all have doubts at some time or another.  Whilst I’m not comparing a property development to a musical movie adaptation, I couldn’t help reflect that property development can seem just as daunting.  When developing, you really don’t get ‘rehearsal time’; it’s just a matter of good planning and then taking action.

I have seen people give up on their property development, quitting when they have hit a dead end with council. Quitting after starting a renovation and not realising just how big a job it really was. Quitting after not hiring the right people.

As development project managers, it’s our role to manage the fears of our clients and the risks of the project.  With risk comes reward.  It can be a big decision to take on your first property development.  But once our clients make that decision, we move them forward quickly. They start seeing results quickly and realise that development can be a good challenge and they don’t have to do it alone.  Often the hardest thing is to make the decision to start.  If you have the support of someone to help you then you won’t feel alone. So enlist a friend or hire support in the area you need it and keep moving forward.

The start of a new year is a great time to stop procrastinating and commence that project you’ve been researching for so long. Have faith and use support like Hugh did.  You too could end up with an award winning result.